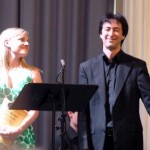 of the composer’s chamber cantata Remember This Op.40.

Commissioned by the Birmingham based ‘Limoges Trust’, the work is a setting of Sir Andrew Motion’s poem, which was written in 2002 to commemorate the eath of Queen Elizabeth the Queen Mother. The cantata was given its premiere by Allan Clayton (tenor), Caroline MacPhie (soprano), The Elias String Quartet and Tom Poster (piano) and was recorded by the BBC.

‘Remember This’ was enthusiastically received and Christopher Morley, music critic for the 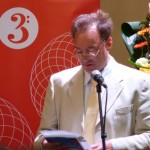 “The music of … Ian Venables has never failed to grip the listener with its accessibility and ability to communicate, and its fearless use of a tonality we all under stand. Frequently working through the vocal medium, his choice of poetic texts has found in him a response which illuminates the message, laying the words so naturally upon the singer, stretching the vocalist whilst never creating impossible demands. Its effect was spell-binding, not only thanks to the performances of the soloists….but also to the sheer quality of the music itself. Earlier we had hear MacPhie gloriously radiant in Faure’s La Bonne Chanson,and Clayton so compellingly controlled in Vaughan Williams’ On Wenlock Edge, a direct ancestor of what is certainly Venables’ masterpiece at this time”.

The BBC recording of Remember This was broadcast on Radio 3 on the 24th August; on Bavarian

Radio on the 10th September and most recently on Swedish Radio P2 on the 22nd November 2011.

On Christmas Day 2011, Ian Venables began work on a commission from Kenneth R. Prendergast of a song setting for mezzo- soprano and piano. This new song will receive its premiere in San Mateo, California in August 2012.

Venables’ continuing association with Novello and Company will see not only the publication of Remember This Op.40, but also his large scale choral work, Awake, awake, the world is young Op.34 which was commissioned in 1999 by Charlton King’s and Cirencester Choral Societies to celebrate the Millennium. Other works to be publish ed this year by Novello include, On the Wings of Love Op.38; Elegy for ‘Cello and Piano Op.2 and the Three Pieces for Violin and PianoOp.11. (See Music Scores)

In addition to his work as a composer, Ian Venables will give several talks about his own music, as well as on the wider subject of English art-song. The first of these will take place between 24th – 26th April at Leigh Park Country House Hotel, Bradford-on-Avon, Wiltshire as part of an ‘Arts in Residence’ music course. Led by Terry Barfoot, this special event will explore the highways and byways of English Music and will include talks by Ian Venables on his songs and Piano Quintet. On the 15th October the composer will be giving a talk at the Ross Classical Music Society entitled ‘Going for a Song’ – An introduction to English art song. A talk for The English Speaking Union is also planned. (date TBC) (See Forthcoming Event)

Last year saw the release of a series of important CDs featuring the composer’s music. They culminated in a recording of the his Piano Quintet Op.27 which was released on the celebrated SOMM label. This work performed by The Coull String Quartet and pianist Mark Bebbington was described in the Gramophone as “Chamber Music in the English pastoral tradition, delectably championed…. Lovers of the 20th– century English music renaissance will derive much pleasure from this enterprising and rewarding SOMM anthology”. This recording also included a selection of the composer’s solo works for ‘cello, violin and viola accompanied by the distinguished pianist Graham J. Lloyd. The Three Pieces for Violin and Piano were singled out for particular praise by David Jennings, writing for MusicWeb International. He described the ‘Romance’ as “astonishingly fine and is music of heartfelt simplicity. This must rank amongst the most beautiful pieces for violin and piano, and not just from this country”. Following the outstanding success of the composer’s first recording of songs on the world-renowned Naxos label, Graham J. Lloyd will, this autumn, record a complete disc of Venables’ piano music. This Naxos CD will be released in 2013.

After completing ‘The Pine Boughs Past Music’ Op.39 the composer turned his attention to finishing his large scale Cantata –‘Remember This’ Op.40. This work was commissioned by the Birmingham-based Limoges Trust in 2008 and has occupied the composer for a number of years. The Cantata is a setting for tenor, soprano, string quartet and piano of a commemorative poem by the former Poet Laureate, Sir Andrew Motion. Written in 2002, ‘Remember This’, was the Laureate’s heartfelt response to the announcement of the death of Queen Elizabeth the Queen Mother. Although this long narrative poem is a tribute to the Queen Mother, it also invites readers to reflect upon their own mortality and the eternal cycle of life and death. The Cantata was finished at the end of 2010 and will receive its première at this year’s Cheltenham Festival of Music on the 29th June 2011, performed by tenor Allan Clayton, soprano Caroline MacPhie, with the Elias String Quartet and pianist Tom Poster. This BBC ‘New Generation Artists’ concert will also be recorded for future broadcast on BBC Radio 3.

Given the nature of recent commissions, ‘art-song’ continues to be the main focus of the composer’s work. However, in addition to the large-scale song cycles, Venables has also found time to compose a number of individual solo songs. These have each been put into groups and they will eventually form a distinct set of songs for either baritone voice as Op.41, or for soprano as Op.37.

Looking ahead, the focus of this year’s creative activities will be the initial background and planning of a new work, commissioned by The Malvern Concert Club. The remit of this commission is a twenty-minute song cycle for voice and chamber ensemble. This prestigious commission is being written for the baritone Roderick Williams and will receive its première during the Concert Club’s 2012/13 season.Other news items of interest include: the forthcoming publication, by Venables’ publisher Novello and Co. of ‘At the Court of the Poisoned Rose’ Op.20 – for counter-tenor or mezzo-soprano, On the Wings of Love Op.38, ‘The Pine Boughs Past Music’ Op.39 and the newly composed Cantata ‘Remember This’ Op.40.

This year the composer is delighted to be working with the Barbirolli Quartet ahead of a number of programmed performances and in preparation for a new recording of his String Quartet Op.32 during the summer.